ALONG THE BICYCLE PATHS OF UMBRIA

From Perugia to the Piediluco lake

ALONG THE BICYCLE PATHS OF UMBRIA 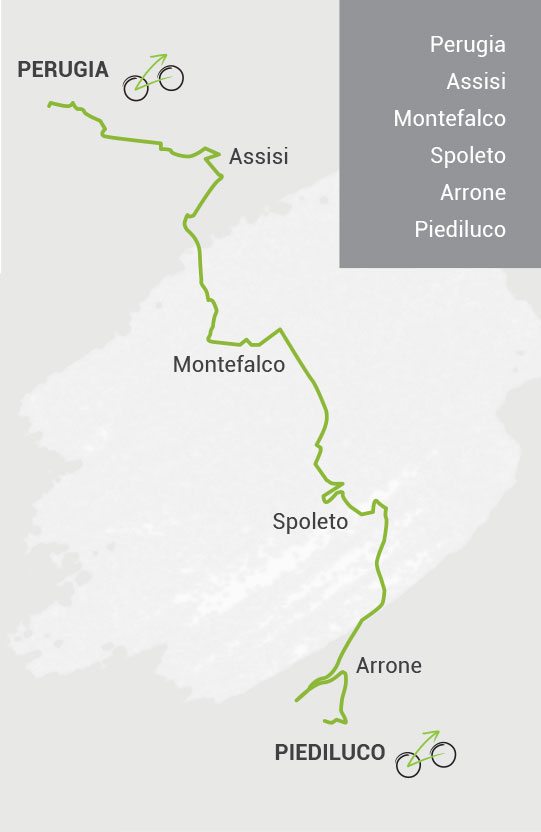 A week of travel to discover by bike some of the most beautiful places in Umbria, from the center of Perugia to the Piediluco lake. You will cycle along cycle paths, low-traffic roads surrounded by greenery and the route of the former Spoleto-Norcia railway, in the stretch that goes from Spoleto to Sant’Anatolia di Narco, the richest route of viaducts and tunnels.

The itinerary develops in the heart of Umbria, between secondary roads in asphalt with low traffic, bike paths and dirt tracks. The region is hilly, so along the way you will find several ups and downs, even if you will not miss the stretches of the plains. The most significant climbs, almost always with not significant slopes, are those that lead to Assisi and Montefalco, the first part of the former Spoleto-Norcia railway and the Forca di Arrone pass.

Overall, the itinerary can be considered medium-easy and a person in good health and active can face it without difficulty, also because the daily mileage never exceeds 35 km. It would be ideal to train in the period before the holiday, especially to get used to staying in the saddle several hours and avoid pain and soreness. 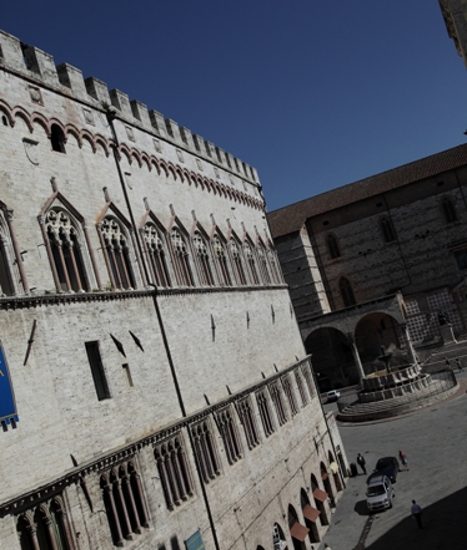 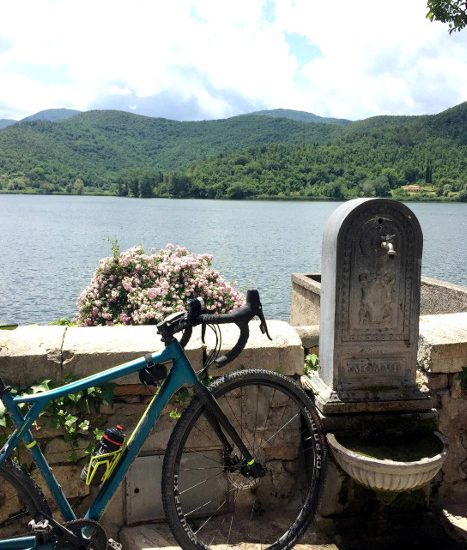 Individual arrival in Perugia and first overnight stay. The historic center of the Umbrian capital is rich in artistic and cultural beauties. In addition, at any time of the year it offers entertainment opportunities such as festivals  and exhibitions. A city on a human scale, ideal to discover on foot or even by bike.
2

You will begin your journey by cycling through two cities of great charm, retracing the route of the Via di Francesco. The stage is easy and develops between low-traffic roads and dirt bike paths. The arrival in Assisi will leave you speechless. Overnight in Assisi.
3

You will leave Assisi behind you to pedal in the heart of Umbria along the charming Assisi-Spoleto cycle path. You will touch the center of Bevagna, an ancient medieval city of great beauty, and from here you will face the only ascent of the day to reach Montefalco, famous for its fine Sagrantino wine, but also for its panoramic position. Overnight in Montefalco.
4

You will start downhill to return to the Assisi-Spoleto cycle path in the direction of Spoleto. The stage is completely flat and along the way you can admire the perched villages of Trevi and Pissignano and the expanses of olive trees that characterize this area of ​​Umbria, before arriving in the beautiful center of Spoleto. In the afternoon you will have time to visit the beauties of the city, from the Duomo to the Rocca Albornoziana. Overnight in Spoleto.
5

This is one of the most impressive stages of the tour, as you will pedal along the path of the former Spoleto-Norcia railway, facing tunnels and viaducts that will take you into the green of Valnerina. The first part of the village is all uphill, while the second is downhill. The slopes are never demanding. Overnight at Castel San Felice.
6

An itinerary that alternates asphalt and dirt roads and flows along the Nera River, surrounded by the nature of Valnerina. Along the way you will cross the villages of Sant'Anatolia di Narco, Scheggino and Ferentillo before arriving at Arrone. Overnight at Arrone.
7

You will start pedaling further south along the Nera river to reach the Marmore waterfall. From here you will come back to Arrone and then continue towards Forca di Arrone, the most challenging climb of the entire trip. When you reach the top of the slope you can admire a wonderful landscape and reach the Piediluco Lake always downhill. 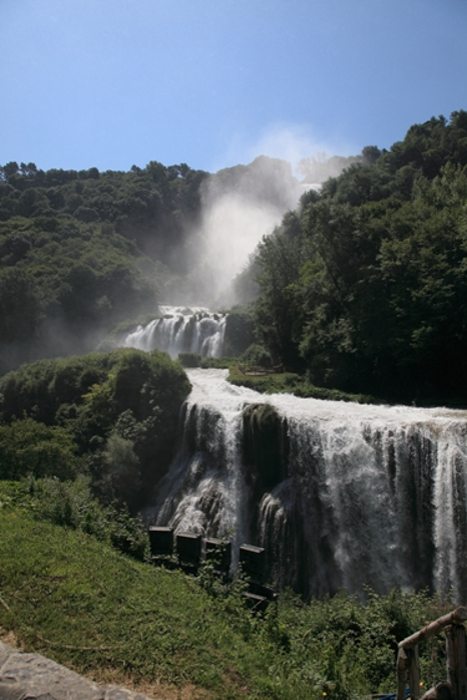 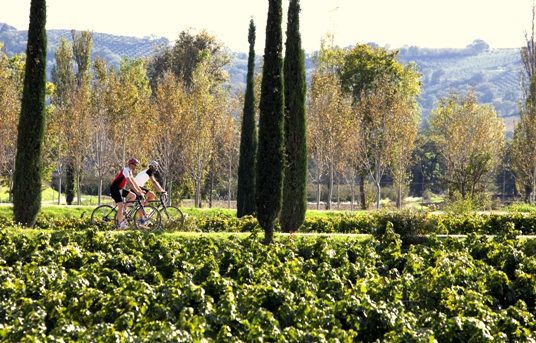 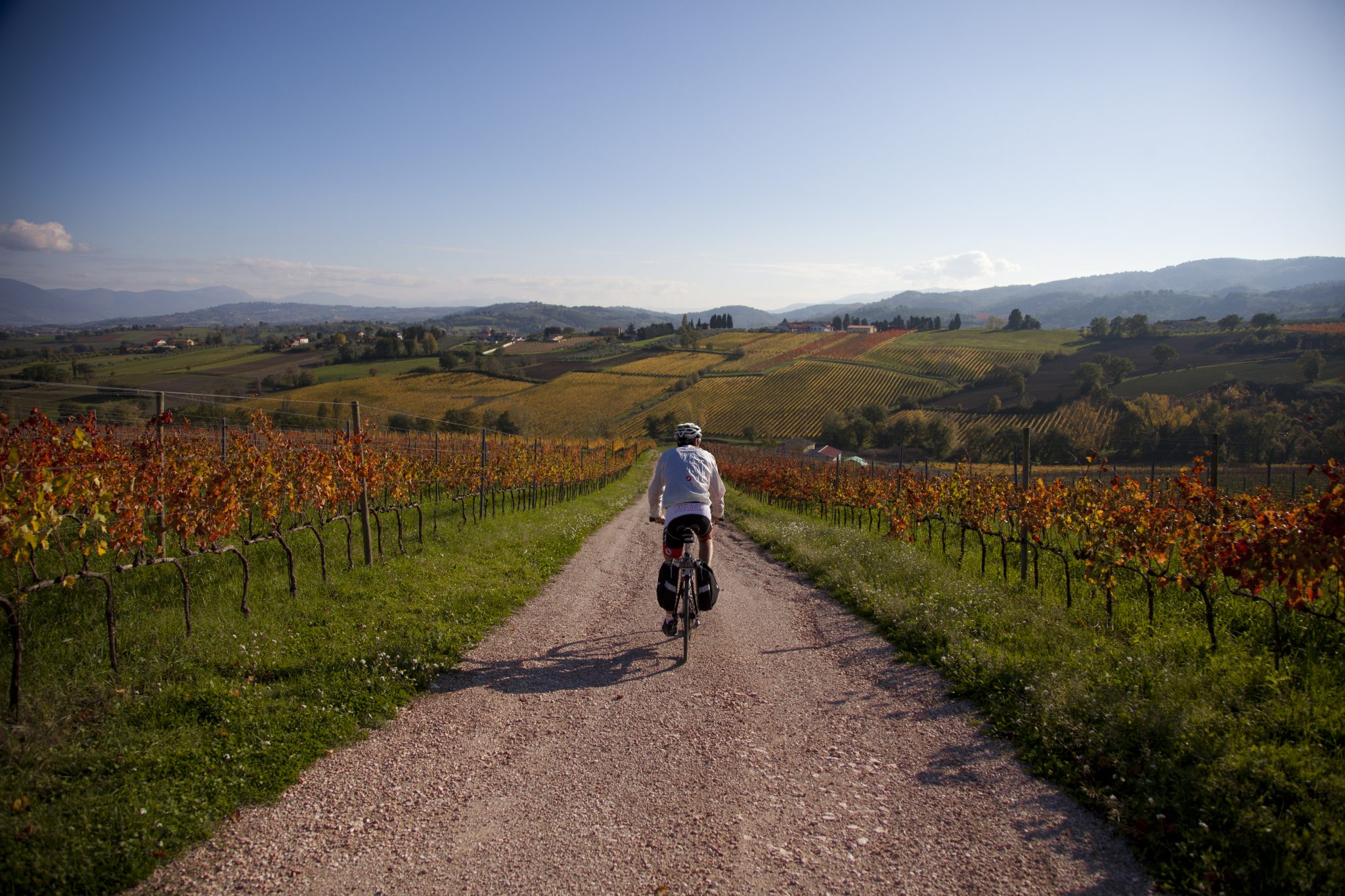 Experiences to enrich the program