THE WAY OF FRANCESCO – SOUTH WAY

THE WAY OF FRANCESCO – SOUTH WAY

COD. 70 / From Piediluco to Assisi

The way of Francesco is a very suggestive naturalistic and spiritual itinerary that crosses Umbria, touching the most beautiful cities of the region, but above all the most important and significant Franciscan places. To live the way of Francis we propose two holiday opportunities, always with a final destination Assisi: the Via del Nord and the Via del Sud. The Via del Sud starts from Piediluco, touches the villages of the lower Valnerina as Arrone, Ferentillo and Scheggino, before to reach Spoleto and then cross one of the most famous areas of Umbria, touching Trevi, Foligno and Spello. A perfect balance between natural beauties and artistic and cultural pearls, a journey less difficult than the North Road, thanks to a more approachable elevation profile.

The itinerary starts from the Piediluco Lake, almost on the border between Umbria and Lazio. After Arrone gallows you enter in Valnerina, touching characteristic villages such as Arrone, Ferentillo, Scheggino and Sant’Anatolia di Narco. You leave Valnerina through the former Spoleto-Norcia railway that will lead you to Spoleto and Monteluco. From here it goes back to Assisi touching Trevi, Foligno and Spello before reaching the Sacro Convento. The route develops on secondary roads, with very little traffic, or along cycle tracks such as the Greenway del Nera, the stretch of the former Spoleto-Norcia railway from Sant’Anatolia to Spoleto, the Spoleto-Assisi cycle path up to Trevi. Much of the journey, therefore, develops completely away from traffic. The itinerary follows in the footsteps of Francesco and has some challenging climbs, but the difference in level is much lower than that of the Via del Nord. The most significant climbs are those of Forca di Arrone, the pass of Spoleto-Norcia, Monteluco and Trevi. In any case, the itinerary can be considered of medium difficulty and with a little training it can be tackled without too many problems. In particular for beginners, we recommend training in the period before the holiday, especially to get used to staying in the saddle for several hours and avoid pain and soreness. 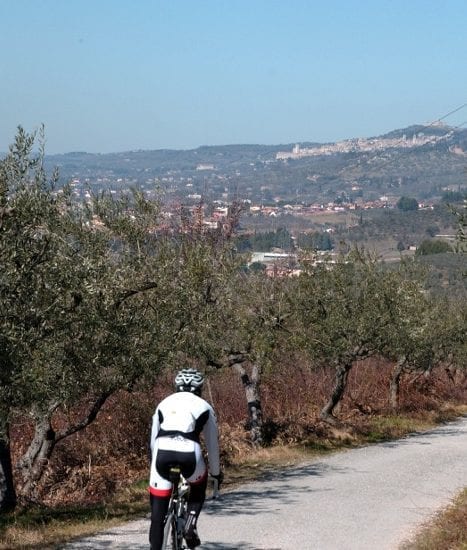 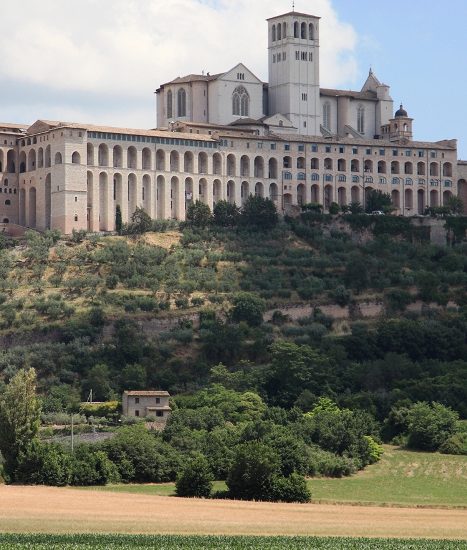 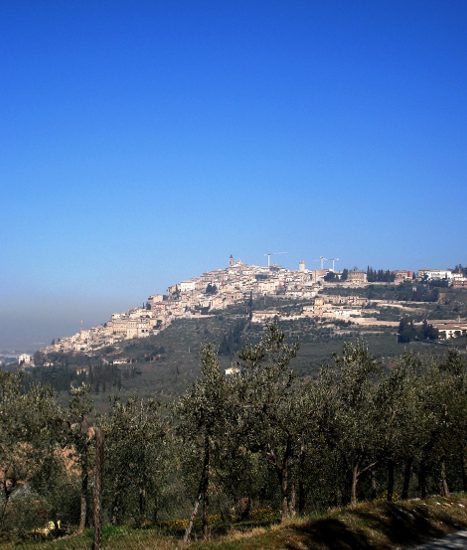 Individual arrival in Piediluco, a small village overlooking the shores of the homonymous lake. A peaceful place surrounded by nature, ideal to spend a relaxing afternoon before leaving for the journey to Assisi.
2

You will start from Piediluco leaving behind the lake to start immediately the ascent of Forca di Arrone. Once you reach the top, after about 3 kilometers of ascent, you can admire a beautiful view of the lake and the Reatina valley. At the end of the descent you will reach the village of Arrone, from where you will begin to climb the Valnerina following the course of the Nera. After passing Ferentillo and Ceselli, you will arrive in Scheggino
3

It is one of the most beautiful but also the most demanding stages of the South Road. Shortly after the departure, in Sant'Anatolia di Narco, you can enter in the former Spoleto-Norcia railway route, which will lead you to Spoleto between viaducts and tunnels. . Here we recommend to visit the city and its beauties, before tackling the ascent of 7 kilometers to reach Monteluco, a very suggestive Franciscan place.
4

A stage much easier than the previous day, but still very nice. You will start downhill in the direction of Spoleto and immediately outside the city you can get on the Spoleto-Assisi cycle path, where you can pedal in the plains and in complete tranquility up to the foot of Trevi. In a few kilometers of ascent through expanses of olive trees reach the village of Trevi. Enjoy the view of the Umbrian valley ...
5

Last stop of the journey, which as always is full of charm because it will lead you to the Sacred Convent of Assisi. But first you will be able to cross other places of great interest, such as Foligno and the enchanting Spello. From Spello to Assisi you will cycle on the Via degli Ulivi, in a truly characteristic landscape. End of services. Departure scheduled in the afternoon.

By train
To reach Piediluco you can use the train to Terni station. For timetables, visit www.trenitalia.com. From the Terni station you have to use the E624 bus line that reaches Piediluco in about 30 minutes.
By car
Depending on the starting point there are various routes to reach Piediluco. Following are the indications provided on the www.piediluco.eu  website, reminding you to check the itinerary that is most congenial to you on Google maps or Viamichelin. From Terni: Statale 79 towards Rieti From Rieti: Statale 79 towards Terni From Rome: State Road 4 (Salaria) to Rieti; then state direction Terni   From Valnerina, Cascata delle Marmore: follow until Arrone; then take the Arronese provincial road towards Forca d'Arrone 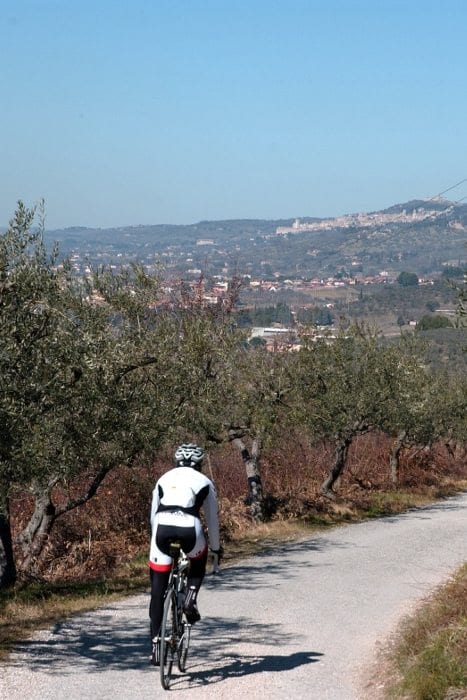 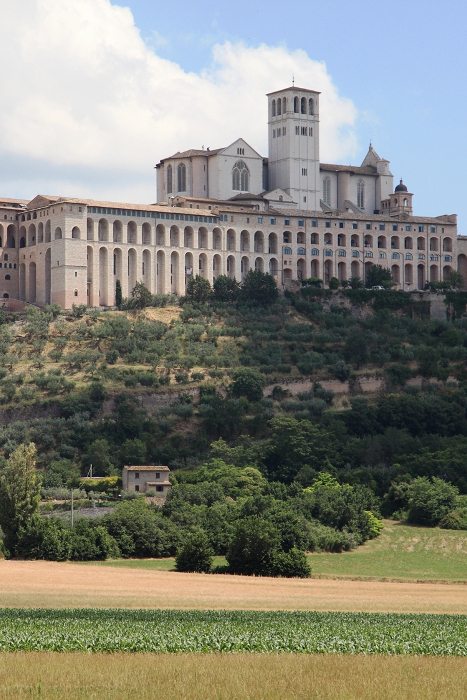 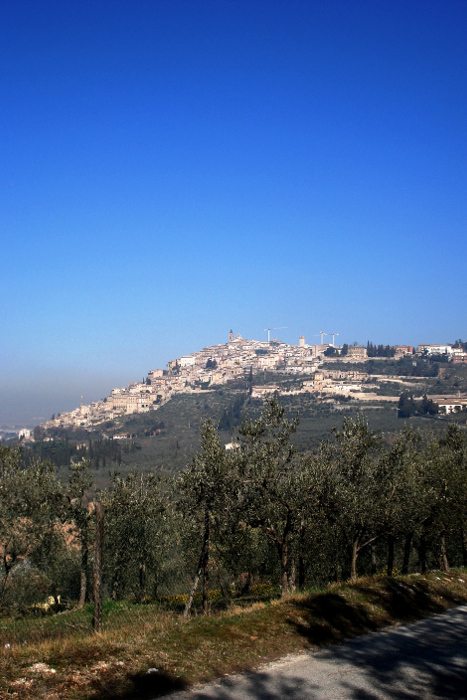 Once the booking is complete, you will receive hotel vouchers and other booked services via e-mail. The gps of the tour, the road book, the list of hotels and all other useful information will also be provided by e-mail. Upon your arrival at the hotel you will find a travel kit consisting of a map of Umbria, a small gadget of Umbria & Bike, a paper format of the road book of each single stage. In case you have also booked a bike rental, you will find them ready at the hotel on your arrival.

Transfer from Piediluco to Assisi